How Much Are You Paying for Those Sideline Seats? (Part 2) 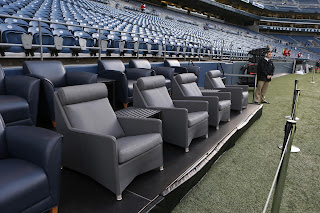 One of the most sustaining memories that I have about the effects of inflation and investing occurred many years ago, when I called a prospective client with the intent of selling some newly issued corporate bonds. The older lady on the other side of the phone, having never invested before, seemed a bit intrigued about the product, and wanted me to explain in detail exactly how bonds worked. After a pretty lengthy conversation about securities, safety and the investment process in general, she concluded this to be a pretty good opportunity, and decided to come into the office to open an account. Upon completing the necessary paperwork, and answering a few last minute questions that she had, we moved to the issue of account funding; as I had no idea of exactly how many bonds she hoped to purchase. In a very cavalier fashion, the lady reached over and pulled out a Wonder bread bag full of $100 bills, and proceeded to align them uniformly in stacks of ten. The sight being so unusual to me, I asked her if she had just come back from the bank, and the cold stare that she returned became an opening prelude to the fascinating story, which followed. I later learned her to be a survivor of the worst economic disaster in American history: The Great Depression. Her father, like many others of the time, had lost all of the family’s money when the banks collapsed, and the cascading effects wreaked economic and emotional havoc on the horrific years which ensued. This traumatic experience so profoundly affected her, that at the age of 12, she began the habit of saving a portion of her money in bread bags, in lieu of the bank, and had continued to do so ever since. The small fortune which she had amassed amounted to over $450,000 and although she spoke proudly about her ability to procure such a substantial total, I couldn’t help but think of the untold sums of money which she had lost over her 53 years of saving. Not only did she forego hundreds of thousands of dollars of investment profits, but because of the inflationary effect on her money, had lost tens of thousands more due to the erosion of her dollars’ purchasing power over all those years. By even a conservative estimate, her total should have been well over 1 million dollars.

This story, (which I affectionately call My Adventure with Wonder Woman) should serve as a precaution to those of you with the means to invest, but due to fear or lack of understanding, are refusing to do so. It’s not enough for you to simply horde your money in an attempt to protect it and keep it safe, but you must understand that in order to maintain its full purchasing power, money has no choice but to grow. Otherwise, the effects of inflation will continue to chip away at it, bit-by-bit, year-by-year. In the final installation of this series, I’ll attempt further to point out the importance of this unsettling reality. And hopefully, at its conclusion, some of you will wisely proclaim those sideline seats to be simply too expensive to afford.

Your Weapon In A Pinch

If you take a serious, objective look at the nature of business, you would find investing to be the greatest protective measure that you have as a consumer to defend against the inevitability of raising prices. This not only includes the usual inflationary increases brought on by high consumer demand, but also involves the familiar tactic of “pinching the little guy” which companies employ to help pay for a variety of different corporate situations. For example, if a company has to payout a hefty claim due to a legal decree, they might just raise prices. If a union dispute disrupts a companies’ supply chain operations, they might just raise prices. Even if a company acquires its chief competitive rival, they might just raise prices. In fact, this strategy of ‘pinching’ can go on and on from company to company, and before you know it, items which you use every day can cost 15 to 20 percent more than they did just one year ago! This does not bode well for the non-investor. And adding a COLA (Cost Of Living Adjustment) pay increase won’t completely compensate for the difference either. No, there’s just no getting around it; investing is the only defensive measure that you have to ‘pinch’ back when companies put on the squeeze. And for those of you who are waiting for such actions to decrease, or to stop altogether, I would strongly advise you not to hold your breath in anticipation of them doing so.

Staring Down A Loaded Barrel

The Middle East oil crisis of the 1970’s taught us a very valuable lesson on how dependent, and susceptible we are to the whims of major oil producing nations. Over that period of time, Americans experienced the price of a barrel of oil skyrocket 19 times higher than it was at the beginning of the decade! And while current technological realities make a repeat of such actions less likely to transpire, more recent price fluctuations continue to remind us of the controlling powers possessed by the members of OPEC, and of the undeniable effect, which it has on our state of finances. Attempting to cope with this reality without investing, means that one would increasingly have to resort to the “robbing Peter to pay Paul” method of money management, whenever a substantial raise in gas prices takes place. Not only is such a method unwise, but more importantly, it doesn’t fix the problem! Borrowing from one source to pay for another only postpones the inevitable, and sooner or later that chicken will come home to roost. The proceeds, which one generates through their investments, could certainly help augment the price differential created whenever OPEC decides to shorten the oil supply. And, speaking as a person who hates the idea of anyone having that much control over my finances, provides a psychological defense against such activities, as well.
Of all the many benefits, which one receives through investing, perhaps the most important, and rewarding, is that of choice. Long-term investors possess a disproportionate amount of choices when compared to non-investors, and the advantages of those choices continue to widen the divide between the haves and the have-nots. I say this not as a subject for analysis, reasoning or debate, but as a statement of fact. There are simply more options available to individuals who invest, and if one would like the same options to be made available to him or her, they need only involve themselves in the process as well. I hope these words stay with you as you contemplate your decision on whether or not to become an investor. And if your final decision is non-participation, such a conclusion is in fact, your choice. Though I would ask you to use it sparingly, for as a non-investor, they will be in short supply.